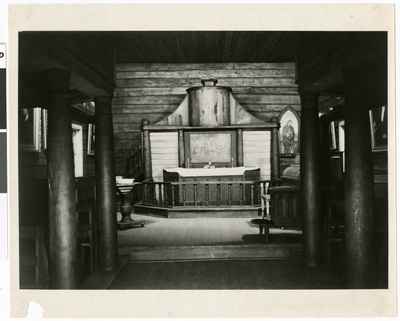 The Muskego Settlement in southeastern Wisconsin was founded by Norwegian settlers in 1839. One early settler was Even Heg, later a celebrated Civil War colonel, whose barn provided a way station for many a new immigrant and a meeting place for worship services. In the fall of 1843, the fledgling congregation issued a letter of call to C.L. (Claus Lauritz) Clausen who was ordained in Heg's home on October 18. On Palm Sunday, 1844, a new church building was dedicated, the interior of which is shown here. This building, Muskego Church, was moved to the campus of the United Church Seminary in the St. Anthony Park neighborhood of St. Paul in 1904, where it stands today. Muskego Church is still used for commemorations and special services.